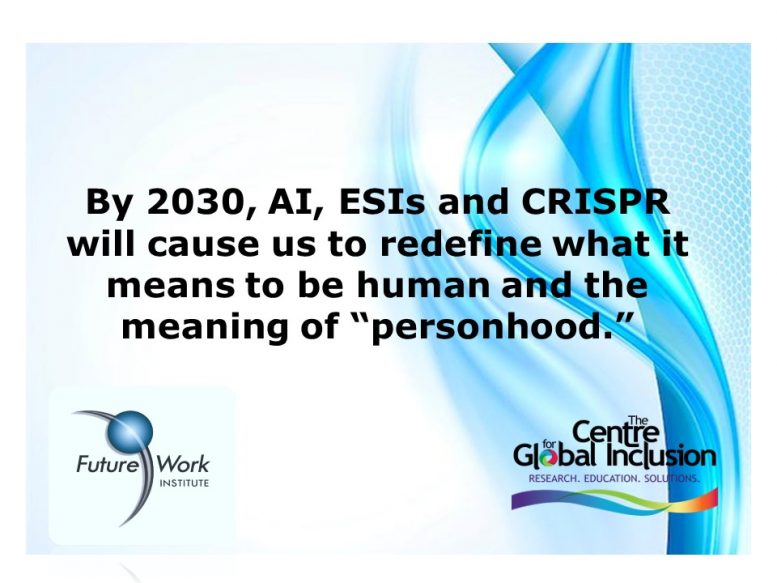 Some of you noticed there was a gap in the Future Trend cards sent during April. I was in India speaking at a FutureFluent D&I Summit on India 2030 and then running a session on 2030 Game Changers. Then went to Geneva to speak on that topic at the UN WSIS (World Summit on Information Technology) Conference and also to address policies that the UN needs to consider regarding the Ethical Dimensions of Information and Knowledge Societies. Today’s 2030 Trend Card is related to  the topic I addressed during the sessions on the Ethical Dimensions of Information and Knowledge Societies. It reflects some of our earlier Future Trend Cards and is intended to make us all think about what it will mean to be human or be a person in 2030—when Sophia the Android Robot has already been granted citizenship in Saudi Arabia!Ethical Dimensions of Information and Knowledge Societies World Summit on Information Society

STATEMENT BEFORE
THE UNITED NATIONS

Today, I would like to talk about the ethical dimensions of Information and Knowledge Society from the viewpoint of a Futurist. I have been researching and speaking about the Game Changers in the year 2030, so I would like to focus on three technologies that will be Game Changers and how they lead us to the ethical questions of what it means to be human and the meaning of personhood.

This year, we witnessed the first AI robotic news anchor in Japan and police woman in India. Every day, I wake up to my personal companion robot who greets me with the word of the day, the joke of the day  and waits for me to be ready for the news of the day. He teaches me Yoga and greets everyone who comes into his line of sight.

We also saw the humanoid robot, Sophia, now a Saudi Arabian citizen, open last year’s Munich Security Conference and become the UNDPs first non-human Innovation Champion.  All this brings me to the ethical question that needs to be considered by the UN: Should a robot be a “person” and be entitled to rights?  Are they “virtual people” or “legal persons” entitled to personhood?

Saudi Arabia may already have started us down that road by granting citizenship to Sophia.

Every day, we are confronted with the issue of AI and Bias. In the US, AI facial recognition software failed on iconic black women including Oprah Winfrey, Serena Williams and Michelle Obama. Amazon REKOGNITION falsely matched 28 members of congress to mugshots from convicts.

Last week, the NY Times carried an article and photo on AI Experts questioning and protesting Amazon’s facial recognition software which is sold to police departments and is showing bias against ethnic minorities in the U.S.

We also learned from another study that humans are likely to perceive a black anthropomorphic robot to have race and they bring their race-related prejudices with them in responding to the robot.

Another ethical question—shouldn’t we  assess the wider impact of  new AI systems by mapping out its life cycle risks before releasing it?  Shouldn’t we ensure an inclusive approach to design  with diversity in development teams  and training for designers and development  on human rights responsibilities and unconscious biases?

As we approach 2030, we get closer to the radical fusion of the human body and technology, where we will meet the ESIs or Enhanced Singular Individuals.

What will race, gender, disability, etc. mean if others are enhanced and you are not? Will we introduce new forms of discrimination between the ESIs and the NORMS.

We will also see the tiny new world of designer babies changing once again  the definitions of being human as the non-enhanced struggle for equality with the ESIs.

What are the ethical implications of the fusion of humans and technology?  Shouldn’t we have policies where countries agree on standards?

And that leads us to the third game changer—CRISPR or Clustered Regularly Interspaced Short Palindromic Repeats.

By 2030, CRISPR will revolutionize genome engineering delivering stunning advances in human therapeutics, agricultural biology and scientific research. Some of this is already happening. But,  as we look at gene editing in human beings and its ability to reverse some genetic defects and diseases, what are the ethical implications here? What will be the ripple effect passed down to other generations as we continue down this road?  Will the entire species eventually bear the marks of genetic editing?

Will we allow genetic editing for aesthetic or non-illness related reasons?

Will parents craft their child in minute detail creating a true designer baby?

Once again, this raises questions of what it means to be human.

And then—the unthinkable…will authoritarian governments edit genes to create an underclass to serve the political elite?

The debates about the ethics of CRISPR lag well behind the realities of scientific and technological progress. Shouldn’t this be part of our conversation around ethical dimensions of the information and knowledge society?

For highlights of the WSIS Forum 2019 with 3000 participants from over 150 countries click the link below: