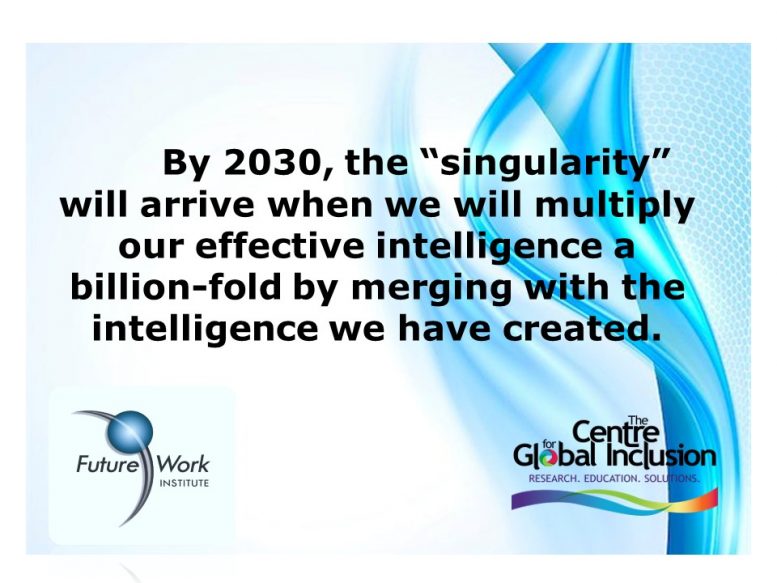 This week, we will look at the trends related to the “Singularity” and ESIs (Enhanced Singular Individuals).

The term, Singularity,  has different definitions depending on whom you ask, and it often overlaps with ideas like transhumanism. But the broad idea is that the rate of technological progress is accelerating exponentially, and will continue to do so, to the point where it escapes all efforts at control. The projected results vary: the extermination of the human species by godlike artificial intelligences is a favorite of the pessimists. Optimists, meanwhile, prefer to conjure up an age of limitless material abundance and infinite leisure, with genetically modified humans bound together by brain implants into a solar-system spanning hivemind, or perhaps uploading their minds into a silicon utopia. (The Utopian View)

Ray Kurzweil, a well known futurist and artificial intelligence researcher, extended the earlier ideas of the Singularity idea in his book “The Singularity Is Near: When Humans Transcend Biology,” where he argues that machines will outstrip human capabilities in 2045. The idea was popularized in movies such as “Transcendence” and “Her.”

Recently several well-known technologists and scientists, including Stephen Hawking, Elon Musk and Bill Gates, have issued warnings about runaway technological progress leading to super intelligent machines that might not be favorably disposed to humanity (The Dystopian View)

Sophisticated AI could make the world a better place. It might let us fight cancer and improve healthcare around the world, or simply free us from the menial tasks that dominate our lives. But there is an undercurrent of fear that runs through our FutureWork audiences as we talk about AI in the future and the Singularity.  Some people are anxious about losing their jobs to a robot or line of code; others fear a robot uprising. We need to understand the line between fearmongering and legitimate concern.

As the process accelerates, we will begin to face the social strife created by those left behind as well as others in developing countries who will feel newly empowered and demand a greater political voice.

There are recent articles, such as the one below in Forbes, that give reasons to believe the singularity is near. Yet other articles from the NY Times and MIT Technology Review question how near it really is.

If you are interested in learning more, you can watch the trailer and then the documentary, The Singularity, which you can stream for $3.99. It is one of the better documentaries that explores the moral questions and how these technologies will change what it means to be human.